‘Where’s the Sears Tower?’ and other questions nobody asks, thanks to Google maps 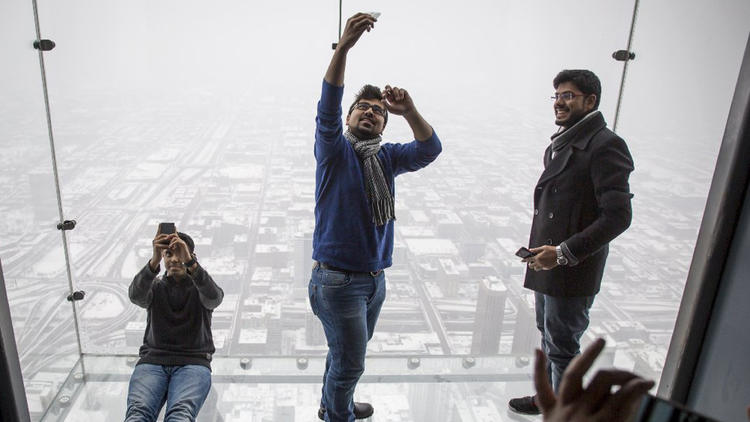 Once upon a time, before phones were portable and smart, way back when Chicago’s tourists could still be spied on a sidewalk puzzling over that old-fashioned paper thingy called a map, the citizens of our friendly city were often called upon to carry out a vital duty.

“Where’s the Sears Tower?” some bald guy in baggy shorts and a Cleveland Browns T-shirt would ask.

“Lake? Which way is?” we might be asked by a tall woman with an accent of unfathomable origin.

The Art Institute? Marshall Field’s? The nearest Starbucks or bathroom?

For every query, we had a reply at the ready, not always reliable but delivered with civic pride.

To especially befuddled tourists, we might say, “Follow me,” and play escort while grilling the visitor: Where are you from? What brings you to Chicago? No, no, don’t call it “Chi-town.”

Giving directions made us feel good about ourselves and our place.

But these days, a time when Siri and Google Maps travel in our pockets, the need to give directions is fading into the black hole of history along with paper maps.

“I used to enjoy sensing when someone on Michigan Avenue looked confused about where they were, and I would offer to point the way,” a man I know recently lamented, which prompts my lament today. “I felt that I was giving them the idea that Chicagoans were friendly and helpful. Now when I see confused tourists talking about directions, they’re looking at their smartphones. They don’t need me anymore.”

Sounds like the hook for a Chicago blues song:

Giving and asking for directions has been an essential form of human interchange since humans first ventured beyond their villages, which is not to say that human directions can always be trusted.

How many times have you asked someone, “Do you know where …?” only to have that person hedge and mumble to hide the fact that she doesn’t have a clue.

I learned long ago that if a person said, “Hmm, let me think, well, maybe,” it would save us both time if I said “Don’t worry about it” and moved on.

But even if Siri is more efficient than the average Chicagoan, she is far less personable. She won’t make you feel welcome to Chi-town or warn you that the natives don’t say “Chi-town,” except ironically.

(By the way, if you say “Chi-town” to Siri, she’ll direct you to Chai Town Nutrition on South Archer Avenue.)

The pleasure of giving directions isn’t the only type of civic function and engagement that smartphones have stolen.

For years, when I would see people photographing each other downtown — a couple, a family, a group of friends — I’d stop and say, “Would you like me to take a photo with all of you in it?”

The trusting stranger would gratefully hand over the camera and dart into the photo and we would all leave feeling a little warmer and fuzzier about our species.

Then lightweight smartphones with their built-in cameras invaded our lives. The selfie became not only possible but preferable.

A few days ago, as I watched a big family try to squeeze into a selfie, I was tempted to offer to take the photo for them. But as they laughed and wriggled, I sensed that the selfie was a big piece of their fun. They were in their private world, that kind of invisible bubble that encloses people when they’re selfie-shooting.

I felt pretty sure they didn’t want their selfie bubble popped by a busybody. And they might have thought I was a phone thief.

But even in a selfie-and-Siri age, there remains a place for the Chicago citizen who gives directions, as I discovered one day last week while walking past the Wrigley Building downtown.

As I passed two guys — 20ish, looking down at their phones — I glimpsed one look up with a furrowed brow and say to the air, “Rush and Illinois?”

I walked on. Then it hit me. I could help. I turned around.

I walked them to a staircase at the far end of a plaza, imperceptible on their map and barely visible from Michigan Avenue.

“You need to go down those stairs,” I said.

They looked relieved. I felt a jolt of Chicago pride.

The Hamptons: open to anyone